Ashtanga yoga is made up of six series or sequences, each with 25 asanas (poses). The sequence is always practiced in the same order to enable you to build up your technique and focus wholly on the accuracy of your alignment. This in turn allows deeper stretches and clears the mind of idle or negative thoughts through intense concentration on the asanas and breath.

Also known as Ashtanga Vinyasa yoga, it is both physically and mentally demanding. When practiced correctly it suits yoga students who want to sweat-it-out on the mat whilst taking-on a deep, thoughtful practice. 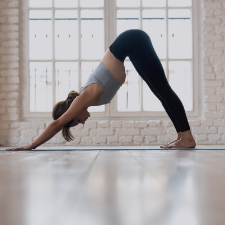 The word “Ashtanga” can be translated from Sanskrit to “eight-limb yoga”. This is the underlying basis of Patanjali’s Yoga Sutras, widely considered the beginning of yoga as we know it today.

Founded by K. Pattabhi Jois, the Ashtanga Yoga Research Institute (AYRI) in Mysore, India, became the birthplace of Ashtanga yoga. Since then, teachers and enthusiasts have travelled to Mysore from all corners of the globe to learn Jois’s method, subsequently welcoming the benefits and spreading the work of Jois through their own teaching.

Ashtanga Vinyasa yoga aims to incorporate the theory from the eight-limbs of yoga. However, the Ashtanga method recognises that men and women these days have work, business, family and a home. Unlike the Vedics and Sages who’s time could be completely dedicated to seeking enlightenment, this style is aimed for someone working on achieving the eight-limbs simultaneously, not necessarily in sequence.

Read more – Ashtanga Yoga – The Theory Behind This Traditional Practice 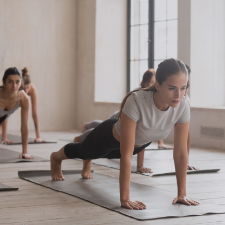 The primary series is known as Yoga Cikitsa, which broadly translates to Yoga Therapy. It focuses to realign and rebalance the physical body by increasing the flow of energy for increased circulation, health and well-being.

Typically, Ashtanga classes taught in the west, will be focusing on the primary series. Whilst it is considered the easiest of the six series, it is also the most comprehensive. This is mainly because everything is new, whereas the other series build on from Yoga Cikitsa.

The primary series includes first getting to know the basic sun salutations. Once these are mastered you can move onto the standing asanas.

Each asana should be matched by connecting with the “ujjayi” breath. Very broadly speaking this is a deep inhale or exhale through the nose, allowing the breath to vibrate against the back of the throat.

The many benefits can be grouped into physical, emotional, mental and intellectual, as this style of yoga is all-encompassing.

Physically – On a physical level, the practice is demanding and Ashtanga will no doubt leave you with more than just a sweaty brow. If you put your heart and soul into the practice, you may leave the mat soaked. Ashtanga yoga will build strength and flexibility and promote a life free from disease. The breathing technique of retaining prana within the body, is designed to extend healthy life span.

Emotionally – Ashtanga teaches to let go of emotions that cause negativity based on reliving past experiences. This is done so by wholly focusing on the present moment, connecting with the breath and clearing the mind of all other thoughts. Ashtanga helps to bring feeling into our lives by removing old conditioning.

Mentally – Ashtanga helps on one hand helps to strengthen the mind by repeating the same asanas in each practice. Even the ones that are not enjoyable! This represents everyday life as there are always going to be some  things that are not first choice to do. Strength of mind to overcome barriers, as well as fear, can be direct benefits of practicing Ashtanga. On the other hand it also helps to let go of the mind through meditation, and connect with the infinite, immortal consciousness that is unrelated to the normal mind processes.

Intellectually – Through the practice of Ashtanga including meditation, visualisation and eventually enlightenment, is to see the world as it is.

Ashtanga is popular in London with a range of classes in all parts of the city.

For beginners it is important to go along to a led-class first, until you have learned the basics for the Ashtanga yoga primary series. After the initial training you can choose a Mysore style class if you prefer.

Yoga Breathing - The Importance of Pranayama
Types of Yoga
Yoga For Anxiety and Stress - Can It Help?